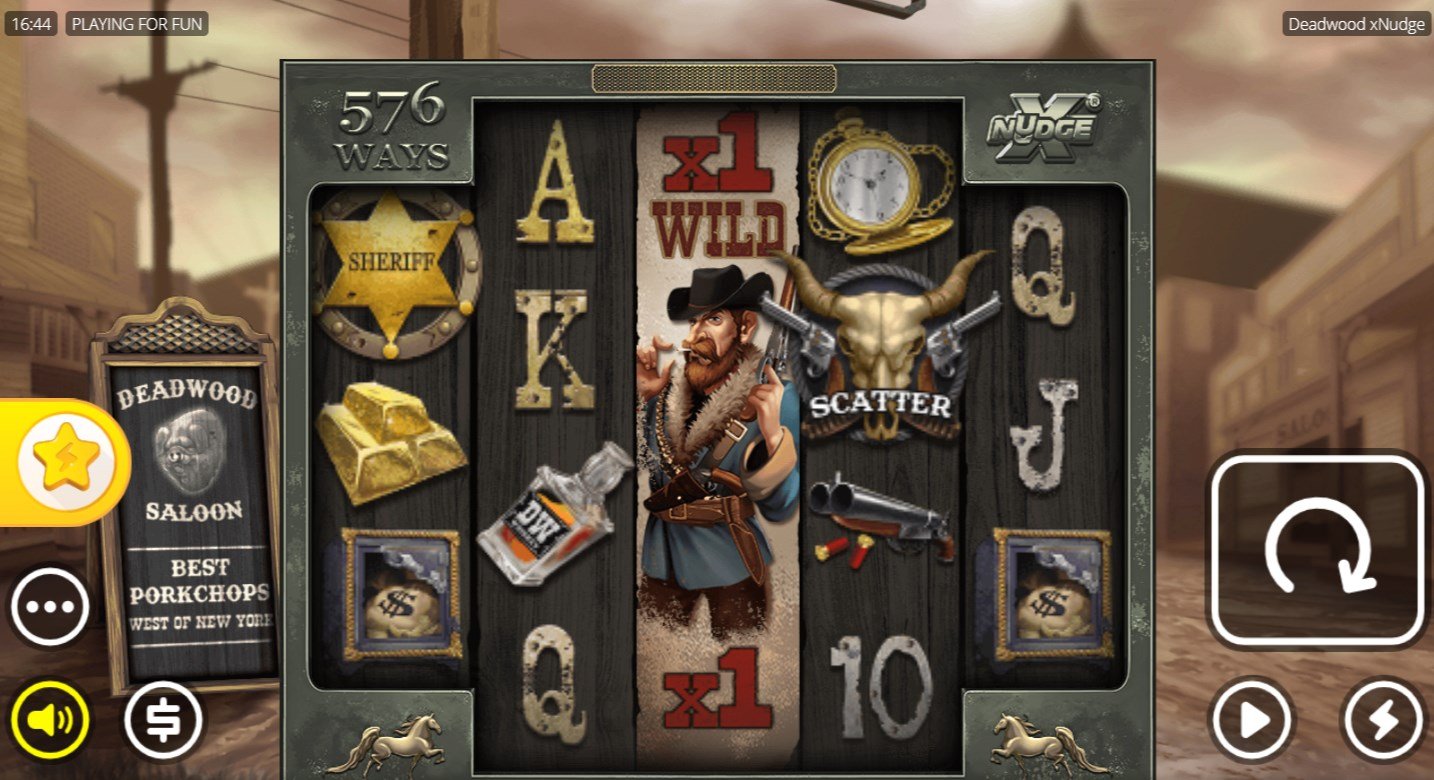 The online casino game publisher NoLimit City presents its slot machine called Deadwood. This title is inspired by an American television series of the same name created by David Milch inviting players into the world of Westerns. The sequence takes place in the late 1800s after the Civil War and features characters from the period.

The Deadwood slot machine takes us to the Wild West, with darkened streets and a deserted city as a backdrop. The online slot reveals a rather atypical format with 3/4/4/4/3 slots and 576 ways to win. On the symbol side, the game consists of two Scatters represented by the Sheriff’s Star available only on reels 1 and 5 as well as a bull’s head, three Wilds named Hunter Wild which correspond to three characters including the Indian, the cowboy and the saloon woman. Each of them has a function specific to a scroll. In addition, the Hunter Wild cover the entire roll and are only accessible on rolls 2, 3 and 4. Other icons are present and grant important rewards such as the whiskey bottle, gold bars, the revolver, the gold pocket watch and the safe. The five classic poker cards complete the selection.

The Deadwood casino game has several features, the first of which is triggered every time a Hunter Wild occurs. The latter covers the entire reel and will be associated with a multiplier that reaches ×4. Another feature called Shoot Out is activated by the appearance of the Sheriff’s Star on reels 1 and 5. During this rotation, all weak symbols will be transformed into Wilds. Finally, the game features Free Spins that come in various modes. Right away, collect three Scatters from the bull’s head and choose between 8 Hunter Spins and 8 Gunslinger Spins. During this game, an additional Free Spin will be offered by obtaining the Sheriff’s Star symbol. A second option for players is to combine three Sheriff’s Stars on the screen. During this session, the user gets 10 Shoot Out Hunter or 10 Shoot Out Gunslinger. During the ten free games, the Sheriff’s Stars maintain their position by activating the Shoot Out function and the payout multiplier. Note that it is entirely possible to purchase free spins for 71× the bet and 750× in Shoot Out.

Finally, Nolimit City’s Deadwood free slot machine provides players with various opportunities to accumulate winnings. From special features to expansive Wilds and payout multipliers, everyone will have the chance to pocket up to 14,000 times their wager. With a payout rate of 96%, the slot is still very lucrative and accessible at only €0.10 per round.

Get The Gold InfiniReels – New Slot From Red Tiger