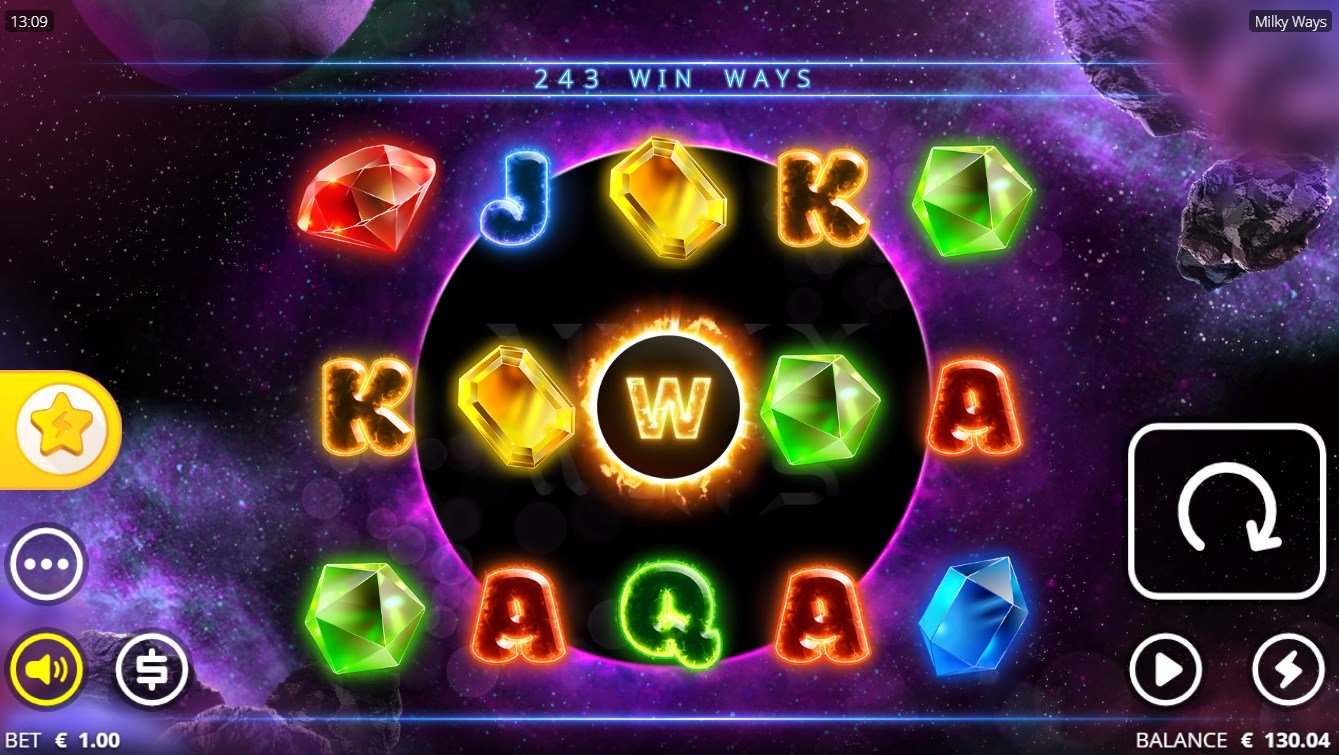 The supplier Nolimit City presents us with a new slot machine called Milky Ways. This production offers us a journey to the heart of the galaxy by discovering the asteroids and the famous black hole. Fans of the genre should enjoy playing this gameplay.

Nolimit City’s Milky Ways online slot gives players a structure of 5 reels, 3 rows and a maximum of 243 winning opportunities. This novelty is aimed at all users who reveal a range of bets between 0.20 and 100 euros per round. With a medium/high volatility, its payout rate is 96.14%. Operators have the opportunity to reduce this percentage to 94.24%. On this security, payment is made in both directions, giving everyone a chance to access various means of winning prizes. The principle remains simple, all that is required is to have at least three identical symbols on the screen, starting from the left to the right of the first reel.

The theme of the Milky Ways slot machine is strongly inspired by a NetEnt title, Starburst. Even the symbols present are reminiscent of this creation, including symbols from a card game and gemstones in blue, green, yellow and red. Each one has a different value depending on their appearance in the game. In terms of graphics, the interface displays a play of lights and colors accompanied by a pleasant soundtrack. In the middle of the screen, the black hole overlooks the space surrounded by asteroids and thousands of stars. In a galactic setting, the icons represented by the jewels reserve interesting prizes for the users.

In Milky Ways, the available options consist of a Wild symbol, Scatter, Free Spins and a bonus game. The Solar Wilds formula starts the list and has the ability to replace any item except the Scatter. This feature occurs only on reels 2, 3 or 4 and is associated with multipliers from ×1 to ×3. In addition to this feature, players enjoy a bonus game that activates when three Milky Ways scatters appear in the center of the reels. Subsequently, three Milky Ways rounds are awarded during which two rows turn into a 5×5 grid with 3,125 ways to win. This is enough to chain the games and gradually increase your winnings on the counter.

With each winning combination, a feature called Spin Fusion is triggered. During this game, spins lock the winning symbols and give a respin. All icons hold their positions and the rotations continue until a new winning line comes in. The slot has an additional Bonus Buy feature for those who can afford it, as the transaction amount is 38 times the bet.

Finally, Nolimit City’s free French casino game Milky Ways offers the potential for some fairly promising winnings thanks to the multipliers and the Fusion Spin. The jackpot can go up to 5,664 times the bet throughout the session despite the presence of low paying symbols. This creation is accessible since June 24, 2020 on online casinos powered by the publisher. Compared to its other designs, this slot machine stands out from the crowd, demonstrating the developer’s progress in the field.