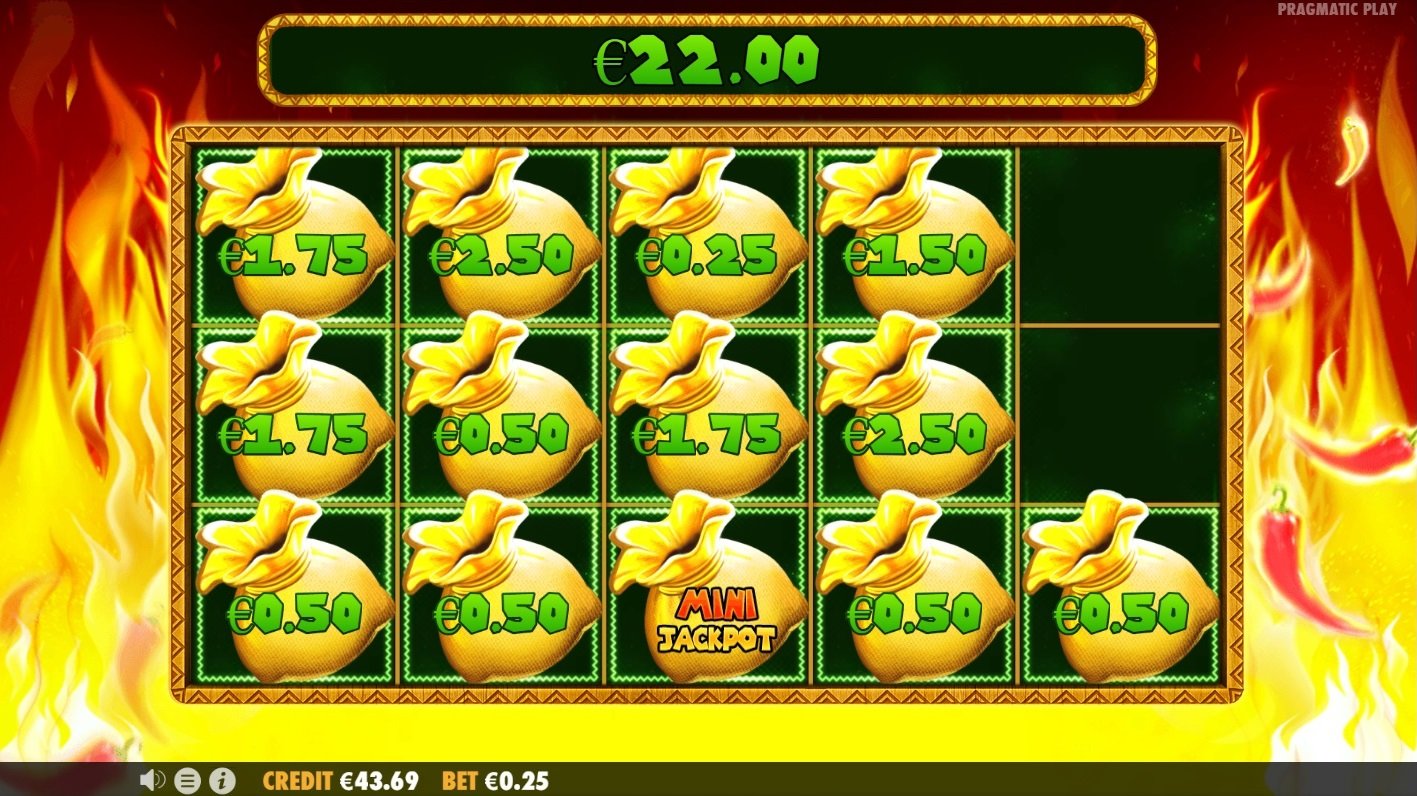 Unforgettable Mexican fiesta awaits users who will play in the slot Chilli Heat from Pragmatic Play. Party participants are promised incendiary Latin American rhythms, national drinks and snacks, and the real highlight of the program will be free spins, breaths and three jackpot levels.

The game was released in early 2018. The device has five reels with three rows of characters and twenty-five fixed paylines. Combo of three, four and five symbols of the same kind begin on the first reel and are formed only in one direction: from left to right. The minimum cost of any rotation is 0.25 credits in the currency of the casino, and a total of 125 game coins can be placed.

In demo mode you can play the slot machine Chilli Heat for free and without registration in all Dama N.V, Casinos. At the beginning of the session the player receives 100,000 conditional credits, which allows you to rotate the drums without rebooting. Download the slot to play offline can not, risk-playing and bonus round on a separate screen is also absent. The manufacturer positions the machine as a medium voltage, and RTP is 96.5%.

The design of the video slot in every way hints that the game will be really hot. The logo of the device is surrounded by flames, and the letter C in the name is stylized as sharp chili. The drums rotate against the background of a sun-drenched quarter with buildings in traditional Mexican style. During the spins, energetic mariachi music sounds. The Elusive Gonzales slot by Belatra is designed in a similar way.

The cheapest symbols are depicted as card denominations. Larger amounts can win a shot of tequila, tabasco sauce and a puppy chihuahua. The most expensive symbol is a friendly Mexican in a sombrero. If five of his portraits fall out on the line during the casino game, the line rate will be multiplied by 200 times!

One of the secrets of the machine’s popularity is the presence of two prize functions at once. One of them includes 8 free spins. It is activated if in any place on the second, third or fourth drum fell three scatters in the form of a mustache smiley face. During the free spin on the reels appear only highly paid symbols and icons with special properties. The repeated fallout of combo scatters increases the number of rotations by another eight, and the maximum limit is not present.

The bag with money is a special symbol. At a fallout on each of them designated random winnings. If on the playing field there are six such icons, the player gets three re-spins. All symbols which have started the function, are fixed on the game board, and standard pictures disappear. On a background of released positions there fly bags which can disappear or be fixed on drums. If the bag has remained on the reel, the number of the remaining rotations returns to initial three. Re-spins are available both in the main mode and during free rounds.

The fixed jackpot has three levels: Mini, Major and Grande. The sums of winnings for each of them can be found at any time of the game – they are displayed above the drums. You can win any of the jackpots while you are spinning again. The biggest prize will go to the player in case if the whole playing field is filled with bags. And those of them, which are marked Mini and Major, will allow you to win the corresponding jackpots.

Authentic theme and original set of bonuses allowed the device to take a worthy place in the range of Pragmatic Play games and remain in demand despite the regular release of new products from the provider. Even in the absence of a thematic prize round slot is able to attract the player for a long time due to the frequent launch of re-spins and the ability to break the jackpot.