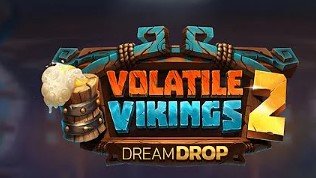 Relax Gaming proves itself once again with this new production that has a rather common Viking theme, but unlike other titles, it could make you a millionaire. Scheduled for release in July 2022, Volatile Vinking 2 Dream Drop opts for efficiency and is already potentially one of the most profitable titles of this month.

Speaking of big names in the online casino market, Relax Gaming is not yet among them. However, the provider keeps on proving itself both with the mechanics of its productions and with the jackpots that are put into play. Founded in 2010 by Patrik Österåker and Jani Tekoniemi, this publisher has set itself the goal of being among the most technical developers in the entire online casino games industry and the least we can say is that they have not strayed from the path. Let’s discover Volatile Vikings 2 Dream Drop, a production that a priori brings Relax Gaming a little closer to its objectives.

The Vikings are not at all idle during this period and all their loot is stored in their barracks. Relax gaming didn’t fail to notice this and so they built this free slot game to let you loot them at will! While the Vikings are at war with each other, you’ll be lining your pockets. Everything is played out in the barracks of these northerners, where the greatest war treasures from victories and looting of villages await you.

The interface of Volatile Vikings 2 Dream Drop offers a rather archaic style at first glance. In the background is one of the Vikings’ barracks, which looks like a workshop, with crates full of gold. In the middle of the interface is the famous game area where you can collect the Norman booty. There are 30 symbols in total and each time you spin the wheel you have to match 8 of them in order to win a bet.

The Volatile Vikings 2 Dream Drop slot has a 6-reel, 5-row play area. It has an RTP of 94.80% and this is indeed its only feature that remains rather mundane. Apart from that, a wide range of bets ($0.20 and $100) is available to you, giving you the hand to bet according to your preferences. You can win up to 10,000 times your bet here or even win the big Dream Drop progressive jackpot that could make you a millionaire. With these last three features you can start dreaming of a life in paradise by betting wisely on this machine.