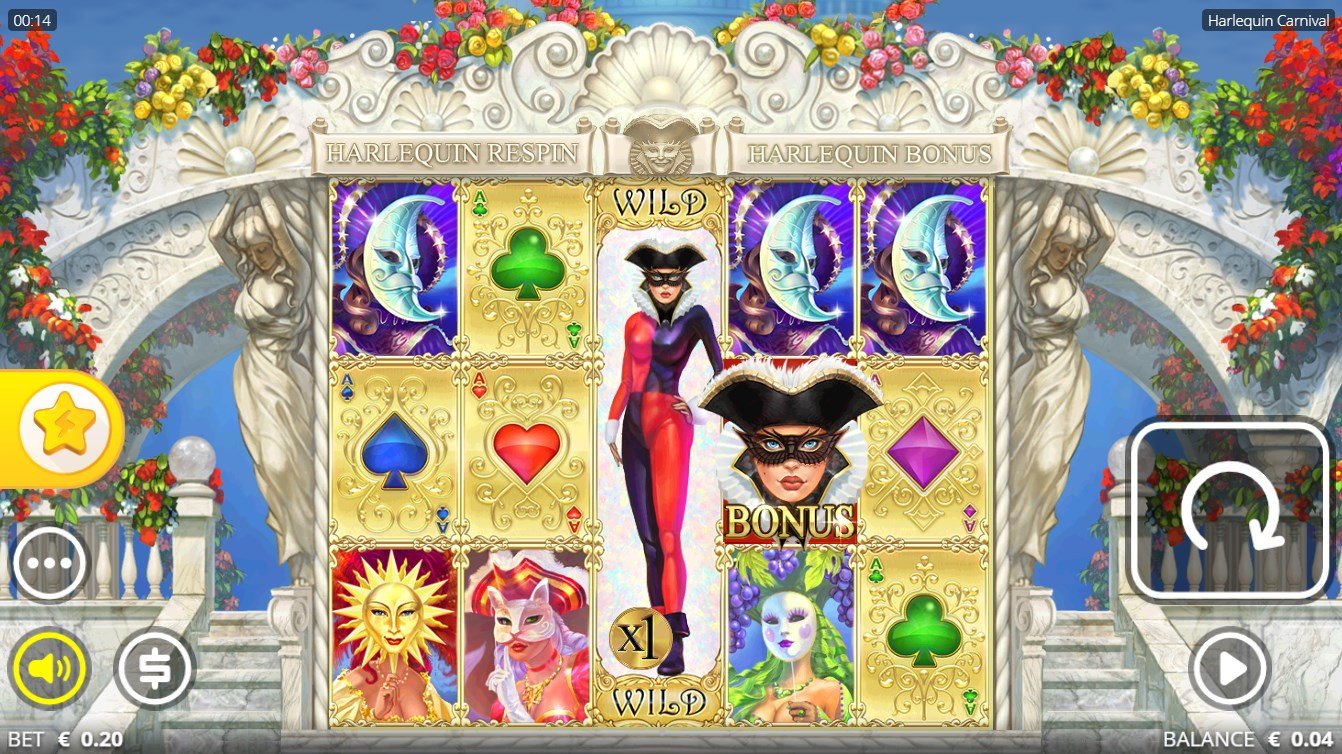 The Harlequin Carnival slot machine, signed Nolimit City is based on the theme of the aristocrats’ masked ball. It’s a 5×3 configuration with 20 paylines that the game grid offers you. You can win a maximum of 5,861x the stake. The game is based on 3 original features: Harlequin Respin, Harlequin Bonus Game, Harlequin xNudge Wild. You also have the possibility to skip the basic game by using the Bonus Buy function.

Creation of the Nolimit City, Harlequin Carnival has a game grid housed on the balcony of a palace. The free casino game is built on a configuration of 5 reels, 3 rows and 20 paylines. It features 9 regular symbols. You are entitled to 4 low pay symbols and 5 premium symbols. The low pay symbols feature golden playing cards including the Ace of Spades, Heart, Diamond and Clubs. The high pay symbols are represented by 5 partygoers hidden under different masks. There is a mask filled with grapes, a mask of a beaked plague doctor, a red cat, a crescent moon, and a golden sun that pays the most. The Wild is represented by the red black Harlequin. It can be substituted for all other payment symbols. The Scatter symbol is represented by the Harlequin.

Nolimit City has a festive theme. The free slot machine is inspired by the masked balls of aristocrats. A delicate and refined theme that gives a pleasant taste to your gaming session. A canopy of flowers adds to the balcony decor in the background. The graphics are sublime, the colors are harmonious. The lights give the game a glittering side and a brilliance to attract all eyes. The Harlequins who are masked characters give a mysterious side to the game.

Harlequin Carnaval is offered to you with a range of bets between 0,20 € and 100 €. It is a volatile game whose RTP is set at 96.14%. Premium symbol wins award up to 15x the bet for a combination of 5. For example, for a combination of 5 grape masks, you win 5x your bet, while 5 suns give you 15x your bet. You can win a maximum of 5,861x your bet in this game. A Nolimit Bonus Buy function can be offered. It allows you to skip the basic game and go to the main event. This transition costs you 70x your bet for 3 bonus symbols in the next round.