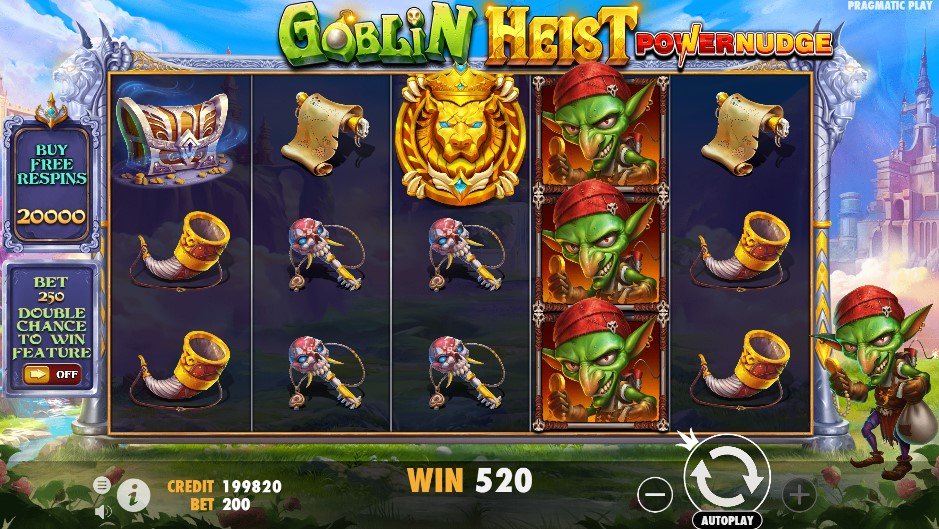 Have you ever heard of goblins? If you’ve ever followed the Lord of the Rings or Harry Potter, you’re probably familiar with these creatures. Pragmatic Play invites you to play them in their new free slot Goblin Heist Powernudge. Only by winning the fight will you be able to walk away with a loot. Can you do it?

In the world of top online casino games, various themes are addressed by software developers. One of these themes is creatures from fairy tales and legends. Generally, those that are stars on the online gambling market are: the Chinese dragon, vampires, the Irish leprechaun and many others. Despite the success of The Lord of the Rings, very few publishers use goblins to design their titles. With the release of the free slot Goblin Heist Powernudge, Pragmatic Play is now one of the few publishers that have used them. Let’s note that this is a production that will make you have a great time rich in entertainment and winnings. Check it out below!

Take part in a fight between Goblins and Humans

Goblin Heist Powernudge is an online casino game designed by Pragmatic Play that invites you to a superb hunt for the treasures of a temple that is under the protection of a goblin. Known for their malice and agility, these supernatural creatures may be an obstacle for you in your quest. As noted in the famous saga “The Lord of the Rings”, goblins are known to live in underground taverns and guard a large amount of treasure. They are often dangerous and are masters in the art of twisting.

Would you be willing to face the most dangerous of these creatures and take over their treasures? You’ll need help to do so. Who better than a dwarf to give you a hand? According to J. R. R. Tolkien’s fantasy, dwarves know how to fight these dangerous humanoids. That’s why Pragmatic Play has included a dwarf as a symbol in its Goblin Heist Powernudge free slot to help you on your odyssey. This one will unfold on a 5 reel, 3 row grid.

To participate in the adventure, you need to bet between 0.20€ and 100€. With the help of the dwarf and a bit of luck, you can win a super jackpot of 4,000× the initial bet. The game comes with 20 lines and a payout ratio of 96.47%. Note that Pragmatic Play has also included several bonus features to help you make money. Apart from these, you will also get the Powernudge mechanic, an innovation that we have seen in the past on the Rise of Giza Powernudge slot, where winning combinations stayed on the reels.