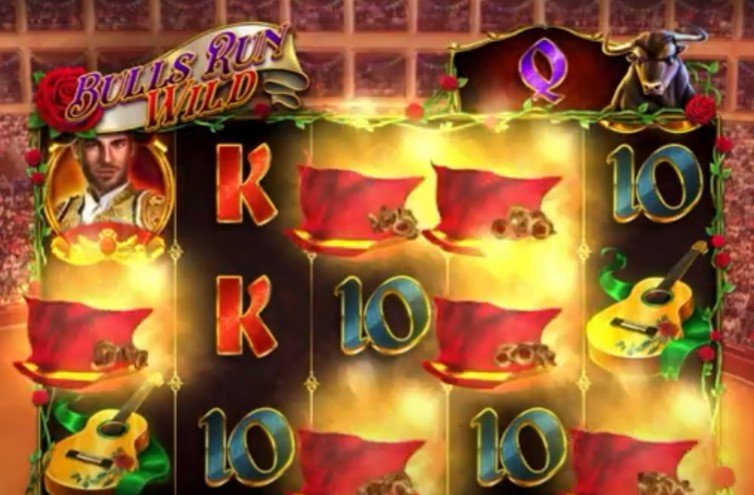 Are you an aficionado? If so, get ready to shout “Olé” when you play Red Tiger‘s Bulls Run Wild slot. In this production you will enjoy a show where bullfighters and bullfighters take turns to fight a bull. Who will be the winner? You won’t be able to find out unless you place bets on the new Bulls Run Wild online casino game.

The new online casino game Bulls Run Wild joins the list of Red Tiger’s most beloved titles. This company founded in 2014 by experts in the online betting industry, has really not been slow to rise to the ranks of the great iGaming software developers. Its success can be justified by the multitude of games it produces. After having tried more than one game, we have deduced that its staff is composed of several experienced agents. They are in charge of continuously improving the gaming experience offered to players in top casinos. They are working hard to make the new Bulls Run Wild slot available. Considering the quality of their previous productions, bettors can already look forward to unforgettable entertainment moments crowned by a jackpot of up to 1,888 times the initial stake.

Bulls Run Wild: Get Ready For The Bullfighting Show

Very popular in Spain, Portugal, the United States, southern EU and even in some Latin American states, bullfighting is a spectacle in which a man or woman faces a bull. The practitioners of this activity are called toreros and toreras. During each fight, participants on horseback or on foot must successfully kill the bull using banderillas or rejónes. Many artists are inspired by bullfighting shows to create art pieces. In the world of online betting, software developers are doing the same to produce titles. Red Tiger’s free slot game Bulls Run Wild is one of them. It takes punters to a circus in Spain where Toreros and Toreras will successfully put a bull to death.

Bulls Run Wild’s bullfighting show takes place on a grid of 5 reels and 3 rows. The cost of the entry ticket varies from 0.10 to 40€. On this free game, bettors will enjoy 20 paylines. They will also have the opportunity to win a jackpot of 1,888 times the initial bet or €75,520, if they place the maximum bet of €40. In order to allow bettors in France to get the most out of their sessions, Red Tiger has integrated some excellent features into its casino game.